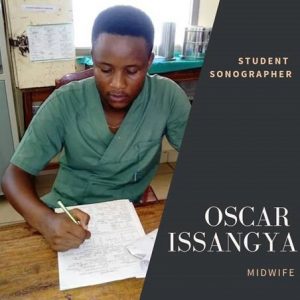 Meet our first sonographer in training!

Our project "Adopt a sonographer" is bearing fruit. Obstetrician Oscar Issangya will start at the beginning of April, partly thanks to your donations, for the training to become an ultrasound specialist. We would like to introduce him to you.

Already after our visit to Tanzania in 2017 we were approached by the Tanzanian obstetrician Oscar Issangya. He is enthusiastic about our work in Tanzania and would like to be trained as an obstetric ultrasound technician. Because he is motivated and qualified, we chose Oscar as the first participant in our project "Adopt a sonographer". We will follow and guide him in the coming period.

Oscar is 28 years old and born and raised in the Arusha region. In 2016 he obtained a bachelor's degree in obstetrics. He still remembers why he chose this education: “In 2012 many mothers and newborn children died in my village. That greatly discouraged me and I asked the health center why the number of deaths had increased. The answer: due to a shortage of staff, equipment and medication. This prompted me to register for obstetrics. For me it is a calling; I am very proud to be an obstetrician and to be able to save pregnant mothers and newborns. "

His motivation to become a sonographer now is clear: “One of the essential services that pregnant mothers lack in our community is ultrasound. This is due to the combination of a shortage of trained staff and equipment and the high costs of a scan, which not everyone can afford. As a sonographer, I will be able to contribute to making ultrasound a standard part of obstetric care in the future. ”

Oscar works as a midwife at the Musoma Hospital, a regional reference hospital in the vast rural north-west of Tanzania. Since its foundation in 1930, the Musoma has focused on mother and child care. Today, around 15 women give birth every day. Every month there are more than 350 births and a total of 400 to 600 women are helped with their birth or with pregnancy-related complications. The hospital's radiology department has an ultrasound device and an X-ray machine. There is no echo device in the delivery rooms and the prenatal care department.

Women do not receive a standard ultrasound check during pregnancy at the Musoma. If they still want an ultrasound, they pay 20,000 Tanzanian shillings, about 8 euros. For comparison: the average hourly wage in Tanzania is 2.24 euros. Only if there are suspicions of complications is the pregnant woman from the delivery rooms or the prenatal service sent to the radiology department. Two sonographers are currently working there, but there is no radiologist. The expertise in the field of gynecological and obstetric ultrasound is therefore also limited. Of every 10 pregnant women admitted, only two receive an ultrasound. That amounts to a maximum of around 50 obstetric echoes per month.
The Musoma Hospital therefore wholeheartedly supports Oscar's training. Oscar's is paid his salary during the training and they guarantee that Oscar can maintain his knowledge after the training.