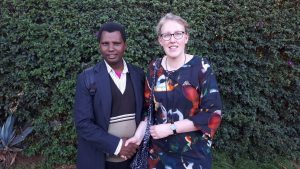 Our third candidate, Wilson Simpa, started the ultrasound training at the end of April! Wilson is a Clinical Officer at Karatu District Hospital in Karatu, a rural district in the Arusha region of northern Tanzania.
The Karatu District Hospital is a public, government-funded hospital. Women can get free pregnancy checks and give birth free of charge. With few resources, care is provided here to a large number of pregnant women. Around 180 women give birth every month.
During the work of the organization Wombs of the World in this hospital there appeared to be a great need for an echo device. They saw with their own eyes how ultrasound can contribute to the quality of prenatal care. That is why Wombs of the World has started a collection campaign